Curb cast member Jeff Garlin indicated on his Twitter account on the 2nd June that season 7 of Curb Your Enthusiasm will premiere on HBO on the 20th September. Thanks to fellow fan Jim for spotting it, he has been invaluable in getting Larry related news on here FIRST! I apologise for having been a bit slack on keeping the blog up to date but promise to be on the ball in the run-up to the big night.

Scott Raab of Esquire recently had a “An Extremely Awkward Encounter with Larry David” over a bowl of soup. Among othe things the two find time to discuss the health of their necks, vegetables, hummus, and the Seinfeld curse.

SR: So Curb‘s seventh season is coming up. You’re starring in a Woody Allen movie. You’re here in New York City. You walked the red carpet last night at the Tribeca Film Festival. How does it feel to be Larry David?

LD: A lot better than it used to, I can tell you that. Better than having to walk from First Avenue to the West Side because I couldn’t afford to get home at night. Having to eat Chef Boyardee, emptying the pennies in a grocery at three o’clock in the morning to buy Chef Boyardee — it’s better than that. I feel good.

For those wondering, I’ve already wiki’d it and Chef Boyardee is a brand of canned pasta.

Also of note, last month Mark Haris from New York Magazine did a excellent feature on Larry, Woody Allen and the evolution/future of Jewish humour. Whether you agree with its assertions or not, if you appreciate the humour of Larry and where it came from, this is a really interesting read. 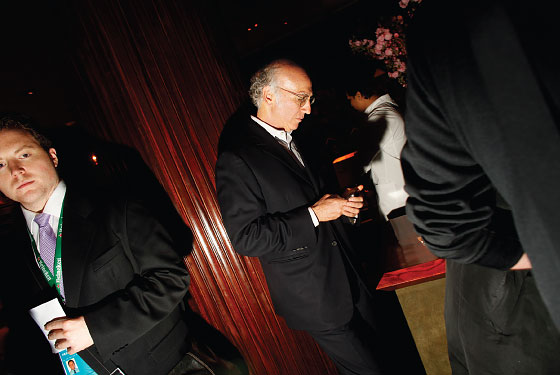 Posted on June 12, 2009 by Alex. This entry was posted in Curb Your Enthusiasm, Interviews, News, Other Projects and tagged curb your enthusiasm, jewish humour, larry david, premiere, season 7, whatever works, woody allen. Bookmark the permalink.