Contest: Win a Whatever Works poster signed by Larry David!

Courtesy of the generous folk over at Sony, I will be giving away a poster like the one below, signed by none other than LD himself!
The competition will run for the next 2 weeks finishing on Sunday the 12 June. 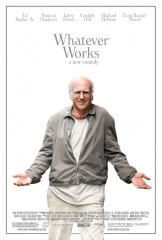 To be in the running for this great prize use the form below to answer these three Larry related trivia questions:

Note: No friends or relatives of mine are eligible to enter the competition. Sorry!

Posted on June 28, 2009 by Alex. This entry was posted in Media, News, Other Projects and tagged competition, contest, larry david, poster, whatever works. Bookmark the permalink.

One thought on “Contest: Win a Whatever Works poster signed by Larry David!”