More ‘good’ reviews for ‘Clear History’ ahead of Aug 10 premiere

If you’re thinking this would be a great opportunity to see your favourite cranky comedian try something new and different, you’re probably in for disappointment. But if what you’re after is more of Larry being Larry, even if this time he’s not playing a version of Larry or even a completely fictional character named Larry, well, Clear History should be a big deal in your summer-TV experience.

Osawald doesn’t really give much of an indication of what he liked about the film (or if he even did enjoy it) but suggests the humor is very similar to Curb, despite Larry previously indicating that he would be using different ideas for the film than he would for Curb. Read more here.

Also yesterday, Rich Heldenfels of the Akron Beacon Journal had this to say about Larry’s latest endeavour:

“Clear History” is much funnier than “Curb” is at times. On “Curb,” the screen Larry David is wealthy and privileged, so there’s a limit to how much he really suffers from his failings; Flomm (Larry’s character) has taken a big fall, and his errors are all the more painful to him – and funnier to us.

I’m still yet to watch the movie but I find this comment really interesting. The one criticism or flaw that I’ve found in Curb, is that it can sometimes be hard to sympathise with Larry’s character the same way we would sympathise with the ‘everyman’ character of George Costanza. I think the principle reason for this is that Larry (in Curb and in real life) really is wealthy and successful. The fact that we can relate so much to the his Curb character at all is a testament to Larry’s ability to write situations people really respond to. Perhaps this film allows him more freedom and places the Larry character in a different context that allows the audience to relate to him more? I’m keen to find out so stay tuned for my review! Would also like to hear your thoughts. Heldenfels also mentioned that the film allows a lot of improvisation from the stellar cast Larry has put together including Kate Hudson, Danny McBride, Michael Keaton and an uncredited Liev Schreiber.  Read more here. 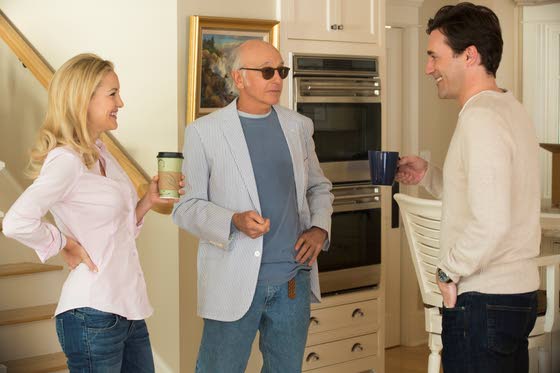 Posted on August 5, 2013 by Alex. This entry was posted in News, Other Projects and tagged clear history, hbo, movie, review. Bookmark the permalink.