Season 9 Episode 3: A Disturbance in the Kitchen

Larry turns to a writer for advice; while searching for Susie’s “little sister,” Larry gets ticketed by an overzealous cop.

OK after quite enjoying episode 2, this one felt a bit weaker. Seeing Salman Rushdie appear was hilarious being one of Curb’s more surprising cameos, however I felt the writing fell a bit short this week.  It still had some great moments (that courtroom scene), Elizabeth Banks was terrific in her scenes and the whole idea of getting Salman Rushdie on the show to illustrate the plus-side of having a fatwa on your head was very clever. However that comic banter , that situational awkwardness that we remember from years gone by was more absent. Larry is still delivering the laughs but it does feel like his characterisation is tad more forced. 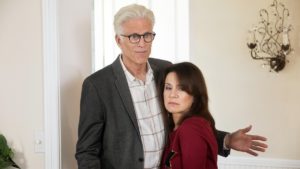