Larry recently unveiled the context behind the Seinfeld reunion that forms the story arc for the seventh season of Curb:

“The context is for years I’ve been asked about a ‘Seinfeld’ reunion — as has Jerry and the other cast members. I would say, ‘No, there’s no reunion, we would never do that, it’s a lame idea’ … but it might be really funny to do that on ‘Curb’ … and I kept thinking of how we could pull this off, and Jerry was game … so we’re doing a ‘Seinfeld’ reunion show.” 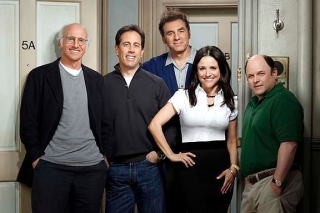 On returning to a Seinfeld “state of mind” Larry said “it was surprisingly smooth”, likening it to “getting on a bicycle”. He also hinted at a possible hour long season finale but wouldn’t give up whether or not fictional Larry would end up ruining the fictional reunion. That does sound like something his character would do and as Larry recently told ABCNews, “I don’t evolve. I don’t believe in character evolution.” What can we expect to actually see? Larry explains in this short video:

As for a possible season 8? Susie has assured us that real Larry hasn’t changed either:

“The most difficult part of doing the show is after every season we never know if Larry’s going to want to do another season or not. I don’t know if we’re doing a season eight, it’s all up to Larry. When he finishes a season, he feels like it’s exhausting and like he has no new ideas … but he always snaps out of it, so I’m hoping we’ll be back.”

HBO have been running several promos for the upcoming season. Thank God for YouTube, here they are (thank you to those who emailed and posted the links):

Posted on August 19, 2009 by Alex. This entry was posted in Curb Your Enthusiasm, Interviews, Media, News and tagged curb your enthusiasm, hbo, promo, season 7, video. Bookmark the permalink.