Larry reaches out to a familiar face, gives a hotel guest sartorial advice and looks to create a diversion to help a friend’s nephew.

I really enjoyed this episode. I sat down to watch it with my father on my 30th birthday, and we giggle and guffawed all the way through. It’s fantastic that we can enjoy Larry’s humour despite our 33 year difference in age. The cringe-worthy comedy of Curb (like Seinfeld before it) is universal, and timeless. I’ve found the second episode of a season is usually pretty strong – Season 6’s The Anonymous Donor, Season 4’s Ben’s Birthday Party and Season 2’s The Bendaryl Brownie are classics that spring to mind. 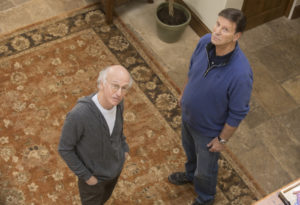 I’ve read some comments from fans that Larry has taken this season further into the realm of the absurd and perhaps even overly caricatured himself. I tend to agree but don’t necessarily see this as a bad thing. As long as it remains funny, that kind of evolution is expected. Larry is always challenging himself to go further in what he can get away with, and the same thing happened with Seinfeld. The plot lines became zanier and the situations more uncanny – but the quality and the frequency of the laughs never changed for me (perhaps until the finale…) The whole idea of a hotel concierge being distracted by Leon pretending to open a pickle jar in the middle of a lobby is particularly absurd, but the humour is rooted in something real. We all identify with that silly masculine notion where men all think they’re the “hero” who has the brute strength to open a seemingly un-openable jar.

Some of my highlights this week: